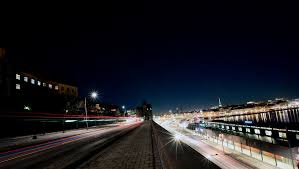 New laser diode-pumped phosphor light sources may soon exist widely in places such as this. Outdoor lighting will be one of the most important areas for these new types of light sources. Image courtesy of pxhere.com.

There is a great push in society today to offer light sources that are brighter, clearer, and more energy efficient. For many years now, people have picked LEDs over other light sources. However, new research analyzes how laser-diode pumped phosphor light sources may provide previously unseen benefits. They offer higher luminance and scalable efficiency suitable for a number of applications, including projection displays.

White-light lasers in particular continue to challenge LEDs. While LEDs are highly efficient and last longer, they produce divergence angles that are difficult to control. Recently, engineers at SoraaLaser in Goleta, California have worked on a white-light laser source that is up to 100x more luminescent than LED luminaire devices. This particular laser surface-mounted device uses semi polar gallium nitride (GaN) laser diodes and phosphors and can produce up to 500 lumens of output from a 300 um emitting area.

Even high-intensity discharge (HID) light sources come with problems. Many outdoor lights such as stadium lights use very high luminance sources to optically control the light in order to achieve a complex illuminance pattern and maintain a manageably small luminaire size. However, often times, HIDs begin to dim beyond an initial surface area of approximately 1.8 meters squared. 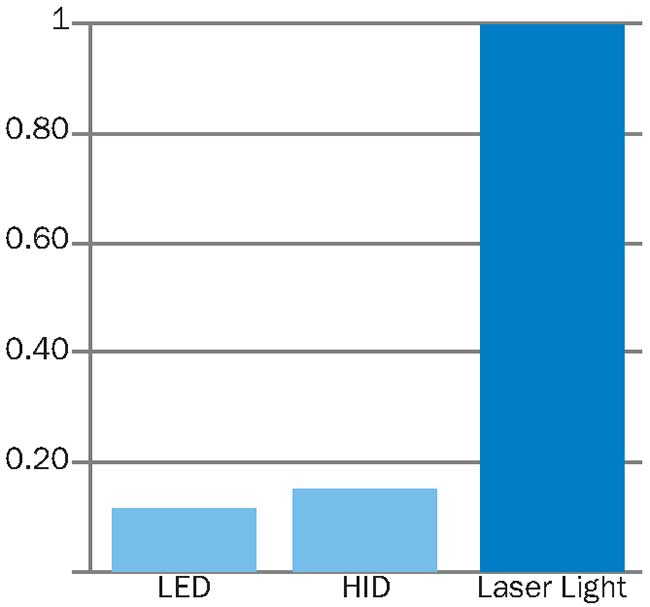 Comparison of the three different types of light sources. Notice how Laser Lights have higher luminance than LEDs or HIDs. Image courtesy of SoraaLaser and photonics.com.

The Push for Diode-Pumped Phosphor Lasers

Explaining the Science and How Previous Issues are Overcome

One of the problems with LEDs and other lights is that they use chips that do not contain wavelengths shorter than about 450 nm. However, white lamps that employ 405 nm violet-emitting laser diodes overcome this deficiency for producing violet light. It also helps that they are cheap and are already mass-produced for optical data storage. Furthermore, there is the issue of chromaticity, or the quality of color that is independent of brightness. As shown below, the chromaticity point of light from a laser diode-pumped light, in this case a white-light lamp, is almost neutral (x = 0.3305, y = 0.3309). This helps to illustrate how rich these new light sources are. 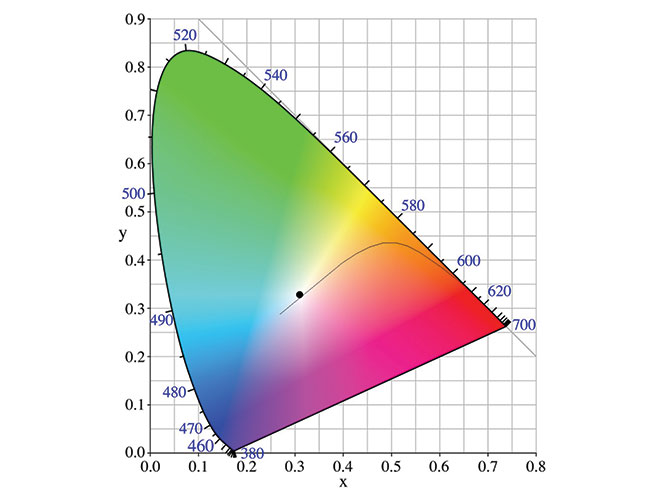 Diagram of the chromaticity of a laser diode-pumped white light lamp. Image courtesy of compound semiconductor.net.

In spite of all of this, engineers often think about how to implement these types of lights. The arrangement is different when engineers use laser diodes instead of LEDs to pump the phosphor. In this case, the laser radiation has a higher intensity and propagates in a different direction. As a result, it is no longer possible to simply deposit a phosphor on top of the pump device. This is why engineers use new optical arrangements when designing these light sources, such as a combination of phosphor plates and reflectors or a phosphor-coated integrating sphere.

Designers may choose to use multiple diodes for pumping. This approach combines multiple laser beams and prevents an upper limit on the optical power available from a laser-pumped light module. Furthermore, this design choice also prevents the phosphor from sitting on a hot component for long periods of time. This is a benefit because the phosphor does not heat up substantially and lasts longer. Other techniques involve directing the laser at a phosphor plate and collimating the resulting radiation with a reflector, or using small luminaires that can use a beam expansion lens to pump the entirety of the phosphor plate.

Future Directions of the New Technology

There are many different ways in which this technology may be implemented and potential places where it will be used. Architectural lighting, vehicle headlights, and outdoor lighting displays are only some of the many examples. However, the components that are needed to build laser diode-pumped phosphor light sources are expensive in many parts of the world and sometimes they are not even widely available. Additionally, many diodes have relatively short lifetimes compared to the more widely used LEDs, especially when they are operated at high drive currents.

In many cases, the ultimate goal is to construct lights that are brighter and cover a greater area homogeneously without significant reduction away from the propagation axis. Many developments are in place to scale higher levels of lumen output per source. There is also the possibility of correlated color temperatures (CCTs) and color rendering indices (CRIs) between multiple beams. Only the future will tell how this technology will be implemented and where it will be used.

Most popular
Laser Cooling: A Future for Cryogenics Without Liquid Coolants
The Importance of LiDAR in Self-Driving Cars
Prism Types and their Applications in Optical Systems
Medical Lasers: A Guide to Various Effects and Choices
Optical Frequency Combs for Molecular Fingerprinting
Three Things to Consider When Choosing an Optical Mount
Lasers in Ophthalmology: The Future is Clear
Surface Emitting Lasers: Types and Applications in Sensing
Fiber Optics’ Exciting New Role in Renewable Energy
Laser Tissue Interactions: Biological Factors to Consider for Dermatology