Vitreoretinal disease is a form of eye disease which affects the retina and surrounding vitreous fluid. Approximately 12 million Americans have some form of vitreoretinal disease, which can cause vision loss. Optogenetics is a brand new treatment therapy being explored, with promising results. Image courtesy of GoodFreePhotos.

What are Vitreoretinal diseases?

The term “vitreoretinal disease” refers to many conditions affecting the retina and the vitreous within the eye. The retina is a light-sensitive layer at the back of the eyeball; it focuses images and transmits data to the brain via the optic nerve. The vitreous is a clear, gel-like substance that fills the space between the lens and the retina. The retina can be damaged in many ways, but most commonly is affected by diabetes or age. The most common vitreoretinal diseases are Wet Age-Related Macular Degeneration (Wet AMD), Diabetic Retinopathy and Diabetic Macular Edema, and Retinal Vein Occlusion (RVO). The retina is integral to vision, and therefore, any damage could lead to temporary or permanent vision loss. Due to the high occurrence and effects of vitreoretinal diseases, much research is being done into potential treatment and cures. One possible treatment therapy being explored is the use of optogenetics.

The field of optogenetics employs light and laser to control neurological activity and modify other cellular activity in living creatures. One major way that cell behavior is affected by optogenetics is through the use of light-gated ion channels. The cells to be controlled have been genetically modified to express certain proteins, light-sensitive ion channels, in the cell membrane, the lipid bi-layer protecting and enclosing the cell. When these cells are exposed to light of a specific wavelength, these channels open, allowing for the flow of ions across the cell membrane. If enough ions flow across the membrane, the membrane potential dramatically changes, triggering an action potential, which can then travel down a neuron to transmit information through the body. In this way, researchers and scientists can modify behavior and function of cells and of the organism being studied.

Channelrhodopsin, halorhodopsin, and archaerhodopsin are the common ion channels used in optogenetics. These channels open at around 473nm, 660nm, and 561nm respectively. As these wavelengths lie within the visible light spectrum, diode and femtosecond lasers are popular experimental light sources used to trigger the opening of the channels.

Cells and proteins can be controlled by light in various other ways, as detailed in the image below. 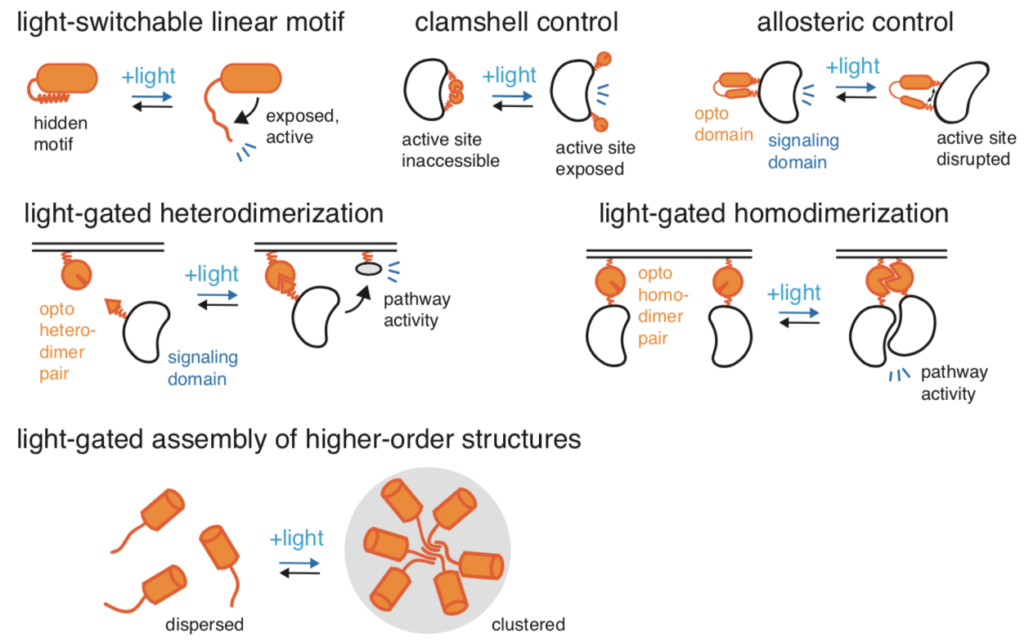 This image details various ways in which applied light modifies proteins within cells. As shown, light has more applications than just the modification of light-sensitive ion channels, although that is the main application of optogenetics. Image courtesy of Current Opinion in Chemical Biology.

In this treatment form, light-sensitive proteins are inserted into retinal neurons which did not initially have a light sensitivity. This allows for phototransduction in the retina to occur when original photoreceptors are damaged. Depending on the location or extent of the damage, different cells are capable of modification. For example, with significant retinal damage, retinal ganglion cells are targeted for modification with light-sensitive proteins. Viral vectors are most commonly used for protein delivery. For ophthalmology, the rhodopsin family of proteins is used; these proteins covalently bind the chromophore retinaldehyde (RAL). The RAL bonded to type 1 rhodopsins undergoes a conformational change after exposure to light, which allows for the opening of an ion channel. Channelrhodopsin and halorhodopsin belong to the type 1 rhodopsin group. Type 2 opsins undergo intracellular G-protein–coupled signaling cascades after light exposure.

This image displays the three primary retinal cells targeted for optogenetic treatment. The figure to the left displays their location and relation to one another. The figures on the right displays the opsins used as well as membrane potential over time after being exposed to light. Image courtesy of Ophthalmic Communications Society, Inc.

When signaling channels from the retinal cells to the brain along neurons are restored, vision can be partially or fully restored. Current research trials are investigating improved amplification and signaling farther down the signaling pathway.

Currently, one main problem with optogenetic treatment is that type 1 opsins require high levels of light to promote activity. These high levels of light can be achieved with an external light source, such as a femtosecond laser. However, this could cause damage in terms of photo-toxicity. Future research can be done to minimize harmful effects of external light sources, or to minimize necessary light required by the opsins.

Other potential treatments for vitreoretinal diseases include stem cell therapy, gene-based therapies, and retinal prosthetics. Human pluripotent stem cells can produce all cells necessary for retinal regeneration, but transplantation is risky and can lead to teratoma formations. In gene therapy treatments, cells are modified with genetic mutations to reverse the effects of damage or to provide resistance from further damage. Unintended mutations are possible, however, and potential gene-therapy treatments often give rise to ethical discussions and debates. Finally, retinal implants have been shown to restore vision, but each prosthetic must be coded specific to the individual’s retinal damage, and resolution is low. These various treatments all show promise for future trials, but all come with their own drawbacks or risks.

The paper detailing optogenetics, among other potential treatments, as a treatment for vitreoretinal diseases can be read here.